(December 20, 2018) MSZL&M Property Group has recently secured a recovery for a Fortune 50 financial institution against multiple Defendants for a catastrophic failure of High Efficiency Computer Room Air Conditioner (CRAC Unit). This unit was mechanically connected to a building wide glycol mix cooling system and the internal BMS (Building Management System) that allowed the property manager to monitor the units.

After only 6 weeks of operating, a coil failed and peeled apart, resulting in the discharge of over 200 gallons of glycol before the system was shut down. The shut down was effectuated by on site personnel since the failure sprayed glycol throughout the electrical components of the CRAC Unit, completely overloading the electrical system and triggering a shut down of all electronics. Without the electrical system online, the mechanical system was not triggered to close its valves and the loss occurred, resulting in $649,000.00 in damages. The coil failure is shown here: 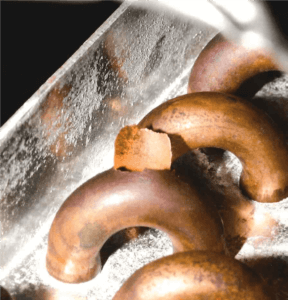 After an initial mediation, the manufacturer of the coil held the position that it had no exposure and refused to contribute. The next 6 months of depositions and metallurgical testing found that the coil had been exposed to extreme heat during manufacturing resulting in a severe loss of strength which caused this loss. It was only at the deposition of the Chief Building Engineer that the coil manufacturer finally had an understanding of how the building cooling system worked and mediation shortly thereafter resulted in a settlement of $595,000.00.

This 91% recovery was only possible due to the client bringing counsel and a strong team of experts into the investigation within 2 days of the occurrence and providing an approach to the case that focused on teamwork between the client and counsel.